Winning the lottery is probably one of the best feelings in the world. Just imagine being rewarded a huge cash prize that can change your life just by buying a simple ticket.

The Indian lottery winners that try out their luck on international lottos can easily live out any and all dreams they have!

On this page, you can read all about India’s most famous winners, the most recent lottery winners and all the Indians that have won international lotto prizes!

As mentioned the most rewarding lotteries to win are the worldwide lotto games.

The jackpots and secondary prizes are so much bigger than government lotteries it’s useless to even compare them.

Don’t get me wrong, I think government lotteries are great but to be honest, they aren’t as exciting and life-changing as online international lotto games.

Since worldwide lottos are becoming increasingly popular among desi players there have been some very exciting news on international lottery winners from India.

Let’s take a look at some of the, now, super-rich Indian lotto players.

US lotteries are known for having the world’s largest jackpots and desi players have really taken them to a liking!

US lotto winners are known for getting outrageous sums of money and being able to enjoy life to the fullest.

As such lotto games from the US are quickly becoming some of the most played online lotteries in India.

Not only are there lots of players who have won online but also plenty of Indian lottery winners in the US as you can also buy tickets at local retailers all over the United States of America.

Powerball is the world record lottery with the biggest jackpot ever – $1,586.4 million dollars!

It is the most popular international lotto in India with a starting jackpot of $40 million.

The fact I think is most exciting is that there have been so many Powerball winners from India, even a jackpot winner! 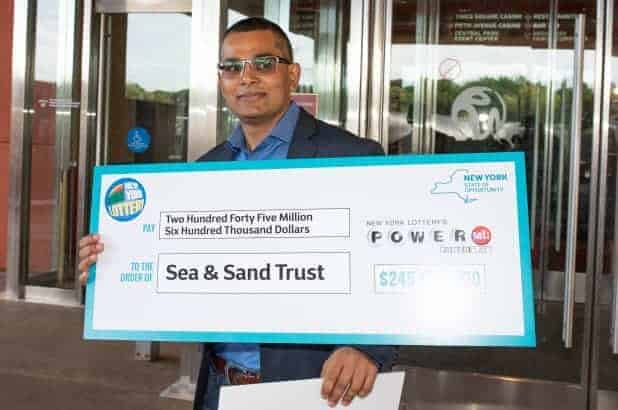 Nandlall Mangal won the Powerball jackpot in August of 2018. Nandlall, who lives and works as a construction worker in New York, won a total of 245.6 million dollars!

He was a regular player for years that only bought Powerball tickets when the jackpots reached over 100 million US dollars.

The second most popular international lottery in India is also originally from the US. Essentially Mega Millions works the same way as Powerball only it is a different brand.

It has paid out the second-largest lotto jackpot ever and the biggest jackpot to one player – $1,537 million dollars!

As its popularity grows in India so does also the amount of Indian Mega Millions winners. 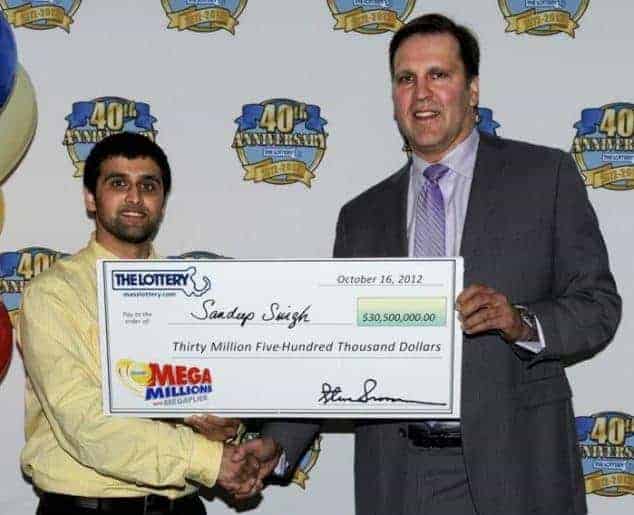 The most famous Mega Millions winner from India is Sandeep Singh.

22-year old Sandeep was working two jobs to help his family make ends meet and had just gotten dumped by his then-girlfriend when he won his $30.5 million jackpot.

With his new riches, he never needs to work again and has all the chances in the world to meet someone special to share it with! 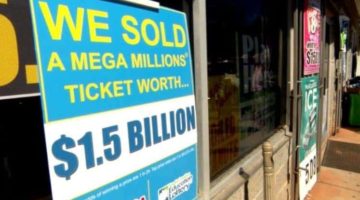 The Unlikely Indian Mega Millions Winner!
Indian part of the biggest lottery jackpot won by a single player! We Indians are…
read more 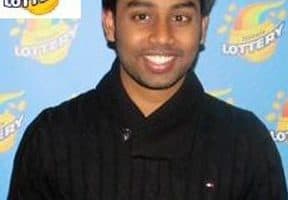 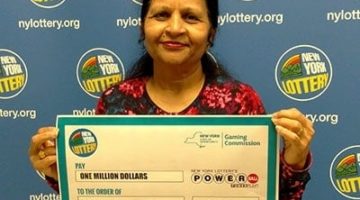 European lotto games have not quite yet reached the popularity of their US counterparts but are still appreciated by many Indian players.

I myself prefer the European online lotteries since you are more likely to win big prizes even if you don’t win the jackpot.

European jackpots usually have a limit on how large the jackpot can become before it starts rolling over lower-tier prizes meaning a fourth or fifth place prize can be worth several crore!

As of yet, there are no famous Indian EuroJackpot winners but I sincerely believe that this is just due to the fact that there are fewer Indians playing compared to other online lotteries.

I am sure it is just a matter of time before we see the first euro jackpot winner from India.

With a maximum jackpot €190 million this lotto is sure to intrigue more Indian players soon. The EuroMillions jackpot prize money gets divided among lower-tier prizes once the cap has been reached.

This increases your chances of winning big prizes immensely!

International lotteries from Arab countries have the most Indian winners of all worldwide lotto games.

This does not make the Arab lotteries better than the US or European, it just has a higher percentage of Indian players especially expats working in the UAE.

Arab lotteries are great but they have some flaws especially regarding online sales.

Nonetheless, some of India’s biggest lottery winners come from their lotto games!

Big Ticket is an Abu Dhabi based lottery accepting players worldwide. Tickets can be purchased both online and through ticket retailers at the Abu Dhabi International airport.

I would only recommend you to buy tickets through the retailers in the airport since they have some security issues with their online sales.

There are plenty of Indian players who have taken the chance to win the Big Ticket lottery and won!

Famous Big Ticket Winners in 2020 include a group of Kerala men who won a 10 million AED jackpot.

The syndicate of 8 friends had been playing together for a while before they won their Big Ticket jackpot!

The Dubai Lottery is without a doubt the international lotto that has the most Indian prizewinners.

Just like with Big Ticket you can purchase tickets both online and at retailers at Dubai international airport.

Unfortunately, they also have safety issues with online purchases.

There are so many great Dubai winner stories to share with you so I don’t know where to start.

Since there are so many I’ll just stick to two different from 2020.

At the beginning of the year, there were four consecutive Indian Dubai Lottery jackpot winners that won between the 21st of January until the 3rd of March.

Now, what would you say if I told you that one of those Dubai lottery winners was a baby?

That’s right, on the 4th of February 2020 Mohammed Salah, who had not yet turned 1, took home the jackpot prize! 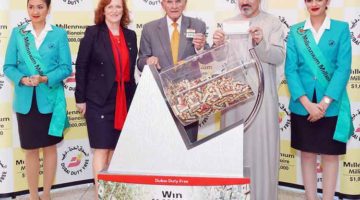 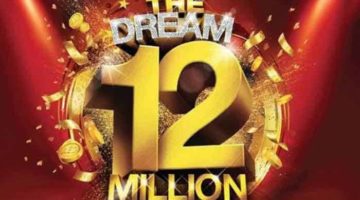 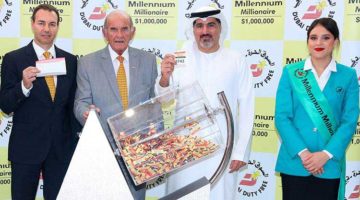 Who has won at Lottoland from India?

Lottoland has had hundreds if not thousands of Indian lottery winners.

Jeeto Lotto can be played every four minutes and has a guaranteed jackpot of 3.6 crore meaning that there could be a Lottoland winner from India every 240 seconds!

Cricket Lotto is the game I prefer though. It has a minimum jackpot of 3.6 crore but one lucky player from Maharashtra won a jackpot worth 73 crore!

Still, I know it is bound to happen soon considering the popularity of Lotto247 in India.

The only big Lotto247 winner in India that I have read about was an anonymous man that won €44,787.89 on the thrilling game of Keno!

A great win but hard to get too thrilled when compared to other stories!

Nonetheless, Lotto247 is one of the fastest growing online lottery sites in India so surely we will see more desi winners soon!

Although PlayHugeLottos can’t boast about too many Indian lottery winners they can brag about how many desi players have won their own exciting competitions.

Throughout the years there have been several PlayHugeLottos winners in India that have won some amazing trips through competitions provided by the lotto site.

Even though the most thrilling winner stories come from international lotteries there are plenty of amazing stories of players winning the government lottery when they need it the most.

Whether it be the lottery from Kerala, the Punjab state or the Sikkim state, they all have some amazing winner stories!

From the regular Kerala lottery draws you can win up to 80 lakhs which is a good amount of money but what really changes lives are the bumper lotteries that can award players up to 12 crore!

In 2020 a Kerala labourer won the new year bumper draw and got a 12 crore payout. The win came as a saving grace since he was on the verge to lose his house due to debt.

Another famous Kerala winner is Mohijul Rahima Sheikh who was a migrant worker who bought a lotto ticket out of compassion for a handicapped vendor and won a 1 crore jackpot!

The Punjab lottery doesn’t quite have as big bumper jackpots as Kerala but they still offer great games.

One player who loves the Punjab lotteries is Rakesh Sharma who is the 2020 winner of the New Year Bumper.

Buying his ticket the same day as the draw he became 1.5 crore richer just a few hours after his purchase. Amazing!

The Sikkim state lotto was known for some of the most amazing victory stories through their Playwin online lottery.

Since Playwin went bankrupt there have been less Sikkim lottery winners.

My favourite worth mentioning is a Playwin Sikkim Superlotto Winner.

M. Bensraj from Kerala won a 5.2 crore Playwin jackpot in the 14th draw in 2002 and became one of the first crorepatis from an Indian online lotto.

How the Biggest Lottery Winners Spend Their Money

The most exciting part of winning a jackpot from some of the worlds biggest lotteries is, of course, spending the prize money!

The number 1 reoccurring thing that winners want to buy is property, both real estate and land.

A lot of players are able to buy their dream houses and lands their families may have lost in the past or just a piece of territory they’ve always wanted.

Another recurring theme is making donations to charities inspired by people who helped them through tough times.

An example of this is Krishna Barri who used his Florida Lotto jackpot to start an education fund in the name of his brother in law.

But the first thing jackpot winners usually do is enjoy a well-deserved vacation to contemplate further what they will do with their new riches!

I have analyzed countless Indian lotto winner stories to see if there are any common themes among the players that might have increased their chances of winning.

The most common theme did not come as a surprise to me since it is something that I have noticed myself and written about several times.

Almost all of the players who have claimed a jackpot had been playing for a long while.

What surprised me though was the fact that so many players were adamant that they had done something kind before purchasing their ticket.

They never said straight out that they think this affected their luck but it is interesting that they seemed to have been rewarded for their goodwill and helpfulness.

So there you have it: the recipe to win is to not give up if you don’t get a winning ticket and to spread good emotions and warmth.

Do this and you might just get rewarded as well!