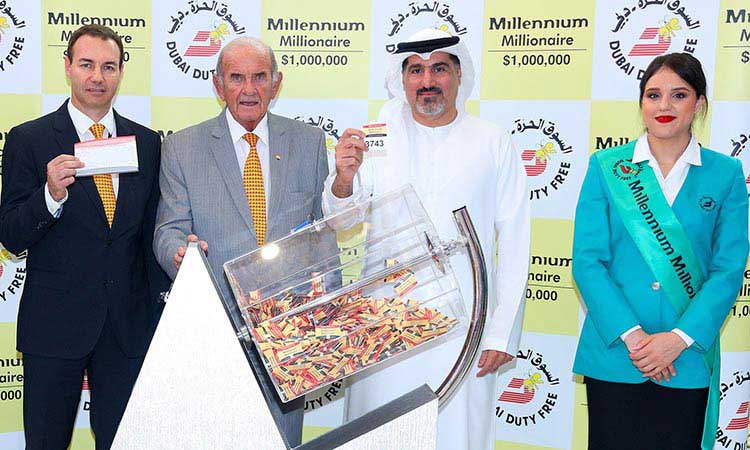 $1 Million to Each of the Two Indian DDF Lottery Winners

Exciting news arrived from Dubai on 17th of September, 2019, where the organizers announced that two Dubai Duty Free Millennium Millionaire Promotion draw players from India had won $1 million each.

The draw was held at the Concourse D of the Dubai International Airport and was conducted by the Dubai Duty Free Executive Vice Chairman Colm McLoughlin and the CEO Salah Tahlak.

The other head members of the Dubai Duty-Free section of Dubai International Airport were also present.

One of the two DDF lottery Indian winners, Sree Sunil Streedharan, was unreachable and unable to comment on her win.

The organizers said that the minute they get in touch with her, she would surely be surprised to hear of her big win.

One million USD would make anyone happy!

The other player from India, Lalit Sharma, commented on his win. He said that this was his second ticket in the Millennium Millionaire Promotion. He bought the tickets online.

You must be wondering how these two Indian players were able to participate in the draw in the first place.

Furthermore, how could they manage to scoop such massive prizes?

Well, Lalit Sharma, bought the winning ticket number 3743 in Series 311 along with a second ticket online.

He is an Indian national, aged 37, born and raised in Chennai, who went to visit his sister in Dubai and got the idea to participate in the draw.

As an owner of a Timber and Plywood shop, he is happy that he now has money to expand his business.

Commenting on his win, Sharma said: “I really cannot believe the good news!”

He added his plans on how he intends to spend the massive prize he won.

“I will definitely expand my business, help my family and give to charity.”

He finished his statement thanking Dubai Duty-Free for the huge prize.

Sree Sunil Sreedharan lives in Abu Dhabi. She was unreachable at the time the winners are announced, but her ticket won in Series 310, with the winning number 4638.

It is not unusual to see players from India winning top-rated international lotteries.

The fact that most massively-paying lotteries are available online only makes this more realistic for Indian players.

Any player, from wherever in India, can buy a ticket online and participate in the most rewarding lottery draws held all over the world.

The fact that these two Indian nationals managed to take home $1 million each only proves that there’s no reason why you should not be the next winner.

So, take your chances, purchase your online lottery tickets and wait for the call. The next winner of a mind-blowing lotto prize could actually be you!

If you are ready to try your luck, check out my favourite lottery sites below and start your lottery adventure with a bonus!