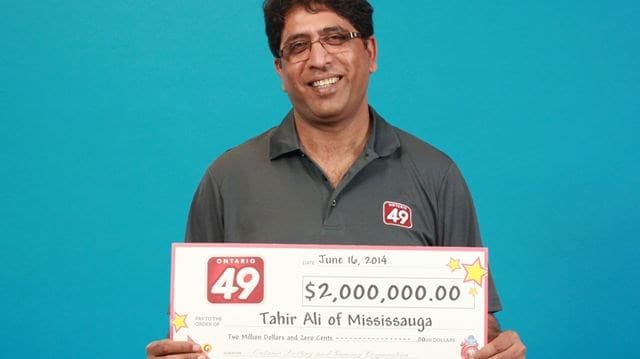 An occasional lotto player from India, residing in Mississauga, decided to buy his first-ever ticket for the Ontario 49 draw, not even dreaming that he would win the new jackpot prize of $2 million!

He went to the Hasty Market on Britannia Road in his town to purchase the lotto ticket, after hearing an ad for the draw on the radio.

His ticket was the winning ticket for the newly-refreshed game that offered a brand new $2 million jackpot with each draw.

The draw took place on the 11th of June, 2014, but Tahir Ali, the Ontario 49 Indian lottery winner of $2 million found out about his win a day after the draw.

Being only an occasional lotto player, Ali heard on the radio that the Ontario 49 draw had a $2 million jackpot prize for grabs, so he bought his ticket for the draw that was to take place on the 11th of June.

While at the OLG Prize Centre in Toronto, Ali explained: “I went to the store to check the ticket and saw ‘Big Winner’ on the self-checker, but I thought it was an advertisement, so I went home.”

Ali, who has been living and working in Canada for the past seven years, further detailed “The next day I checked the numbers online at work and realized that I won the jackpot!”

He then went home to tell his wife the awesome news “There were tears of joy in our eyes. We are so happy,” he shared.

Commenting on his plans, Ali shared that he plans on spending some of the money he won to help his children.

“I want to make sure they continue to work hard, but I am happy to tell them that their education costs will be taken care of,” he said.

If you’ve been reading our winners’ stories, you have probably seen how many lucky Indian lotto players have become millionaires and even multimillionaires, like Ali, playing the lottery.

Some purchase their tickets in the stores, some online. But if you’re living in India and you wish to try your luck on international lotteries, you would have to choose the second option.

Buying an online ticket, you could get in the race for those massive million and multimillion-worth of prizes, and you could become the next lotto-made millionaire or multimillionaire!

Do not miss out the opportunity to become one, since all you need to do is buy a cost-effective ticket for the online draws and wait for luck to strike! The next winner story we share may be yours!