The second most popular European lottery invites Indian players to now take part of the massive prize pots handed out every Friday. Play now and get a chance of winning the EuroJackpot jackpot with a value of more than Rs. 715 crore! Try out your luck for a possibility to change your life for the better!

How to Play EuroJackpot

A few years ago, the only way to play the big European continental lotteries was to purchase your tickets from qualifying jurisdictions. But thanks to the wonderful online world, you can now buy these tickets globally. And benefit from the same awe-inspiring jackpots.

To play online lottery in India you simply need to follow a few simple steps.

You’ll still be able to benefit from buying single, multiple or future tickets. Go for the quick pick function or choose your own numbers.

In terms of buying EuroJackpot lottery tickets from physical distributors, you can only buy them if you find yourself in Croatia, Czech Republic, Denmark, Estonia, Finland, Germany, Hungary, Iceland, Italy, Latvia, Lithuania, the Netherlands, Norway, Poland, Slovakia, Slovenia, Spain, or Sweden.

Luckily, you can also buy your tickets from online third-party distributors such as LottoSmile and MultiLotto.

Prices do tend to vary from site to site, so always a good idea to know what’s out there:

We’ve already highlighted a few trustworthy websites where you can purchase tickets for the EuroJackpot lottery online. But how do you pick the best one?

All of our listed recommendations are trusted and safe, but each site offers different special features.

Match the jackpot draw numbers? LottoLand will double your winnings.

Want to make a deposit via UPI or Indian Netbanking? Go for Multilotto.

New to the game? LottoSmile will give you a money-back guarantee on your first ticket if it doesn’t win.

You may think that you can only buy EuroJackpot tickets from Europe, but that’s not actually true. That only really applies to buying tickets in person. If you want to buy your tickets online, there are plenty of options available.

If you want to play the EuroJackpot lottery in India, all you need to do is buy your tickets online by a 3rd party distributor, like Lotto247.

The added bonus is that even if you can’t buy tickets from your state in India, you can buy these tickets legally and avoid the stress of waiting in line or travelling to another state.

Although the EuroJackpot doesn’t reach the staggering heights of lotteries like the EuroMillions and the PowerBall it is specifically designed to pay out more frequently. This actually gives you better odds of winning the big prize.

The jackpot is a rolling jackpot with a cap. Initially, this meant that the jackpot could only rollover 12 times. Since 2016, EuroJackpot has opted for a cap of €90 million.

If the jackpot isn’t rewarded at this point, it is automatically rewarded to the next eligible tier. This means that you can win the big prize even if you don’t have all five balls and the two drawn Euro balls.

There are 12 EuroJackpot tiers. You’ll be awarded a prize based on the number of drawn balls that match your ticket.

Unlike several other lottos, the EuroJackpot prizes aren’t fixed and depend on the number of tickets purchased.  Every week, the awards offered will vary.

The table below shows an estimated prize size based on payouts from July 2020 to July 2021.

Due to security reasons and EU laws, the identity of EuroJackpot jackpot winners isn’t revealed to the public. But that’s not to say there haven’t been plenty of fantastic winner stories in the past but sadly no Indian lottery winners yet.

To date, €8.239 billion has been paid out to players all over the world, with seven players winning the massive jackpot limit of €90 million.

Online websites selling lottery tickets have only really become a thing recently. So, it’s nice to know that via LottoLand EuroJackpot have created several crorepatis. 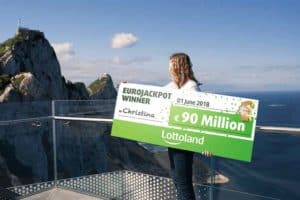 In June 2018, a 36-year old cleaner, known simply as Christina M, snagged a €90 million win on the EuroJackpot, by purchasing her ticket on LottoLand.

An epic camper van road trip, from coast to coast across the USA.

It was a record payout for EuroJackpot, so we’re sure she managed to reach her dream.

Friday 13th is considered by many as an unlucky day, but how about Friday 14th?

There were 39 million tickets added to the draw, so it was a pretty decent prize for this anonymous player.

Ever thought of playing in a syndicate?

You can play with friends or join an online group. The idea is that the more that join, the more tickets you can buy. Up your chances as a group and share in the big prize.

Back in 2014, a group of steelworkers in Finland decided to pool their resources to buy a bunch of tickets together. The idea? No matter what was won, it would be split equally between all who chipped in.

They got lucky and hit a massive jackpot of €57.3 million, taking home €5.7 million each (before tax).

Yes, the quickest way to get your EuroJackpot Results is to obsessively check the EuroJackpot site until you get results. But let’s face it. Who has the time? The best use of your time is to download one of the dedicated apps like LottoSmile or PlayHugeLottos.

With these sites, you’ll not only be alerted to games draws, but you will also be able to easily access old draws, and keep track of your overall winnings.

Most lottery sites will also allow you the opportunity to check in on the EuroJackpot results to see how well you have done on a single ticket, a range of tickets or over a set amount of time.

After the massive success of EuroMillions, a few European states decided it was time to get in on the action. This was back in 2005, but it took a while for things to get going.

Finally, in 2012, European countries not included in EuroMillions decided it was time to join the party. To this day, only Spain sells tickets from physical distributors to both European lottos.

The whole idea of setting up this sort of lottery was to create a larger jackpot, the EuroJackpot lotto reaches an audience of 300 million people. More tickets lead to bigger rewards.

After setting a cap of €90 in 2016, it didn’t take too long for a lucky Czech player to set a new record and win a €90 million ticket. At the same time, excess funds allowed three players to claim their share of €22.9 million for matching 5 balls and 1 euro ball.