In this Ultimate EuroMillions for Indian players, you will learn the ins and outs of this very popular worldwide online lottery. Get 7 correct numbers and you have a chance to win up to ₹1510 crore! Take a chance and change your life!

How to Play EuroMillions

There’s a reason it’s known as the millionaire maker. Since 2004, the EuroMillions has created over 500 multi-millionaires. That’s a lot of crorepatis.

The EuroMillions lottery is one of the worlds most famous online lotteries alongside Powerball and Mega Millions.

If you want to play the EuroMillions from India, you’ll need to sign up at a third-party lottery distributor site. You can try one of the sites we’ve recommended above.

The EuroMillions lottery ticket price in India varies from site to site. There are also extra features that can be added to your ticket.

For example, if you choose to play the EuroMillions at Lottoland, you can add Number Shield to your ticket for an extra ₹120.00. Using this feature, you’ll be protected if you win the jackpot at the same time as other players. You’ll still be able to claim the full prize.

We recommend you to play the EuroMillions lottery at Lottoland since they offer the best price.

The sites in India that allow you to buy EuroMillions lottery online tickets vary not only in terms of price but also in terms of features.

Multilotto makes it easy for Indian players to make deposits, by allowing UPI with Paytm and Netbanking deposits. You can also use their app to track the results live.

PlayHugeLottos allows you to use Intelliplay to set parameters for the purchase of future tickets, from any of their offered lotteries. Set it up and all you need to do is wait for your winning ticket.

LottoSmile offers a money-back guarantee on your first purchase.

Win the jackpot through Lottoland and they’ll double your winnings.

If you want to play the EuroMillions lottery in India, you are going to need to sign up for a 3rd party lottery site.

There are several sites that sell tickets to some of the biggest lotteries in the world.

Once you’ve chosen the right site for you, you’ll want to create an account and make a deposit.

It’s up to you if you want to pick your own numbers or use the quick pick to allow the system to pick the numbers for you.

You can choose to buy a single line ticket, several lines, or even sign up for future lotteries.

The EuroMillions jackpot is a rolling jackpot starting at $17 million.

The lottery currently has a cap of €220 million, but it increases from time to time. If the cap is reached, it will remain in place for four weeks. If it still isn’t won, the jackpot will be awarded to the next qualifying tier.

The jackpot is won by hitting all five numbers and the two lucky stars.

The EuroMillions award is distributed over 13 prize tiers. Payouts vary based on the number of tickets sold for the draw.

The table below is based on the average EuroMillions prize payouts between September 2016 and July 2021.

Just like with the other big European lottery, EuroJackpot, there hasn’t yet been an Indian EuroMillions winner, but we think that just makes it more likely that there will be one in the near future. Nonetheless, there are plenty of other games with Indian lottery winners.

Here are a few of the more interesting winners’ stories. 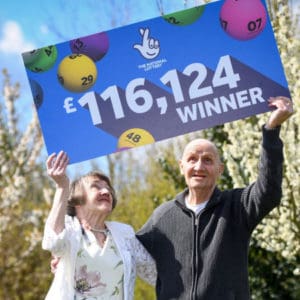 Usually, Denis would play the numbers of his children and grand-childrens’ birthdays, but on this fateful day he wasn’t able to.

Mr. Fawsitt had forgotten his glasses at home and wasn’t able to see well enough to play his regular numbers. He went for the quick pick option and got lucky. 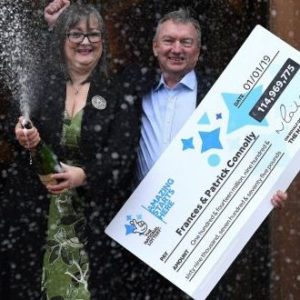 On New Year’s Day 2019, Frances and Patrick Connolly from Northern Ireland managed to scoop up £114.9 million in the EuroMillions. Theirs was the only winning ticket for the draw.

Since then, they have used their newly found fortune to make the world a better place. From the moment they won, they have shared more than half of their fortune with loved ones and charities.

During the Covid19 lockdown, they donated countless computers to children who were unable to access their education. 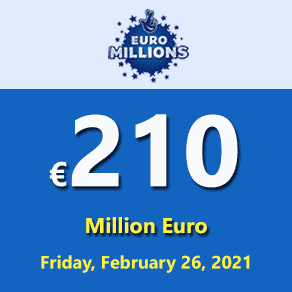 The biggest ever EuroMillions jackpot was won by a single player from Switzerland in February 2021. A massive €210 million.

After the jackpot was won, the cap was pushed up to €220 million, meaning that another player might possibly win a new record jackpot in the following few months.

Regardless of where you choose to buy your lotto tickets, you’ll easily be able to find the EuroMillions results. Shortly after the draw, the winning numbers will be updated online.

Log into your account at any of the recommended sites, and you’ll also be able to check if any of your tickets are winners.

Three times a year there is a EuroMillions Superdraw. Regardless of what the current jackpot rollover is at the time, a Superdraw pushes the jackpot up to at least €100 million.

Depending on which European countries’ EuroMillions lottery you enter, you’ll be able to qualify for different raffles. This EuroMillions feature goes by several names, in Spain, it’s known as El Millón, in Belgium the My Bonus, in Portugal the M1lhão.

There’s a raffle for every country that takes part, it is included in your ticket price and awards one lucky winner in each country, during each draw.

Some countries also offer special add-on games for an extra fee. For example, if you add the Etoile+ to your French ticket, any EuroMillions prize you win will be increased.

The EuroMillions lotto has been around since 7th February 2004. It started when France, Spain and UK, wanted to offer a bigger lottery. With more countries participating, jackpots could grow to much bigger amounts.

The first draw took place on Friday the 13th, a surprising date for one very lucky player who finished the day like a millionaire.

By the end of 2004, several more countries had joined including Austria, Belgium, Ireland, Luxembourg, Portugal, and Switzerland.

Over the years, a few changes have affected the EuroMillions, including adding extra draw days and more balls.